Defense and Tomlin have their Groove Back 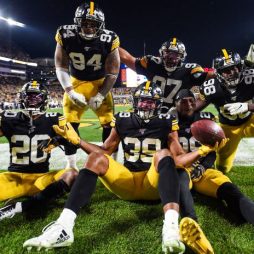 The Pittsburgh Steelers proved their credentials as an all-round team, battling to a respectable 8-8 record in the 2019 season even without star quarterback Ben Roethlisberger. Mike Tomlin produced arguably his best coaching job since his arrival in Pittsburgh in 2007, keeping the Steelers relevant until the final week of the term.

The problems began from the off when Antonio Brown left for pastures new in an ill-fated trade deal with the Oakland Raiders, while Le’Veon Bell departed for the New York Jets during free agency. Roethlisberger then went down after just the second game of the campaign with an elbow injury that ruled him out for the rest of the season.

‘The Killer Bs’ that were the identity of the franchise for several years was gone just like that. Pittsburgh were forced to continue with Mason Rudolph as quarterback for the rest of the season, while James Conner and Juju Smith-Schuster were expected to rise to the occasion and replace the production of Bell and Brown respectively.

The season did not play out in the fashion that many predicted, as Rudolph and Devlin Hodges split time at the quarterback position, with neither staking a claim to dislodge Roethlisberger permanently. Conner battled injuries throughout the campaign and was never at his best, while Smith-Schuster’s production suffered due to the issues with the two quarterbacks.

Fortunately for Pittsburgh, the defense returned to the levels of old. They were dominant for large stretches of the season, finishing fifth in yards allowed, and boasting the third-best unit against the pass. T.J. Watt was outstanding throughout the campaign, and was in contention to be named defensive player of the year due to the caliber of his performances on a weekly basis.

Bud Dupree was also a force on the other side of the line, notching a career-high 11.5 sacks. Cameron Heyward’s presence in the middle of defense was a huge factor in their success. Not only was he stout against the run, but he also was a constant presence in the backfield. It was even more impressive considering that the franchise lost Stephon Tuitt for the season. A trade move for Minkah Fitzpatrick was an inspired decision, helping to solidify the secondary not only for the 2019 season, but for many years to come.

It bodes extremely well for the next campaign where the defense will have to remain at an elite level to cope with the Baltimore Ravens’ dynamic offense. The performances of the defense should give fans plenty of confidence heading into the 2020 campaign even going as far to back the team to win the AFC Conference – something which has not happened in 10 years.

There is plenty of value to be found on the Steelers for next term, for example, online casinos such as  Sugarhouse Casino are offering odds of +1600. These are undoubtedly good odds to take, while they’re also reinforced by the fact that the Sugarhouse Casino online bonus review is very positive from BonusFinder, suggesting that there could be money to be made from backing the Steelers next term with the sportsbook.

Roethlisberger’s return will hold the key and whether he is able to return to the peak of his powers. An elbow injury is a tough one to bounce back from for a quarterback, although the talent of the defense will ease the burden on the 37-year-old. Pittsburgh asked a lot of their star man for too long, and pressure at times became overwhelming. Going back to the days of the mid-to-late 2000s could be a blessing in disguise, as we all know it was a recipe for success for the franchise.

Although the 2019 season was disappointing, it may have been the dawn of a new era for Pittsburgh. Tomlin and the defense got their groove back, and adding the future Hall of Famer back into the mix could make the Steelers a contender once again at the top of the AFC.